Italian research has committed itself to this goal since to the starting point of this challenge: the historic Geneva Conference of 1955 convened by the United Nations on the peaceful exploitation of energy by nuclear reactions.

The conference, which took place during the period of declared “cold war”, however, brought together scientists from all over the world in a unexpected strong collaborative and cohesive spirit, with the participation of Russian scientists as well.

The Italian presence has therefore followed the entire challenging path of studies and goals and now we will certainly not miss in this last important phase.

The construction of a new important scientific program of international interest has recently started in the ENEA Frascati Laboratories: the Divertor Tokamak Test.

The project avails itself of the collaboration of several Italian Universities and other Research Institutes.

DTT was created to tackle one of the crucial missions for the construction of the reactor and this is done with the support and coordination of the EUROfusion consortium which places DTT's mission alongside the ITER project (which aims to demonstrate the possibility of supporting a positive energy balance) and on the path towards the realization of the DEMO reactor prototype.

In the future reactor it will be necessary to manage the enormous flow of heat that hits the external walls carried by charged particles on the peripheral surfaces.

The expected heat on the divertor is greater than 10 million Watts per square meter, comparable with that of the Sun's surface. The solutions offered by current technology are unable to reach these specific power levels.

DTT will be able to test new and different configurations and materials for divertor, and to optimize the magnetic topology of the field lines near the heat dissipation surfaces.

Obviously, it will be necessary to demonstrate that the performance on the heat dissipation capacity will be achieved without any degradation of the good confinement of the fuel inside.

DTT will be the main European tokamak and the most complete and flexible experiment in the world to face and solve the problem of disposal the residual heat.

So DTT will be an international project, but it is an all-Italian project. 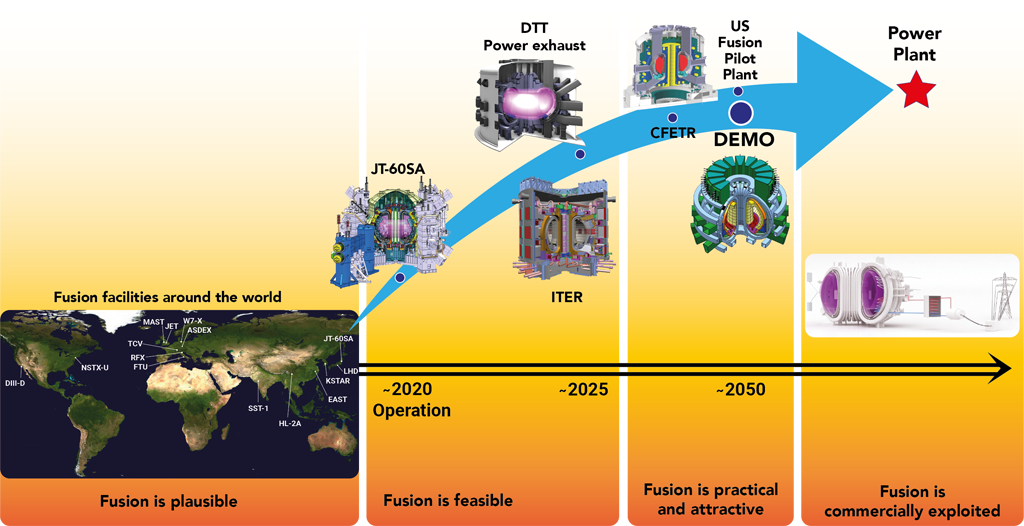 DTT fully integrated within the European roadmap towards DEMO and beyond